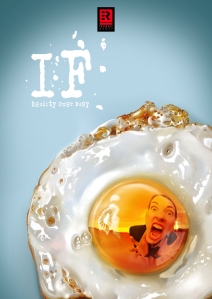 This is the first scene of a new TV episode I am writing (with help from LA writer Brendan Pollecutt), based on a play I did ages back at the Market Theatre.

Its a comedy drama set in one of those uniquely South African 24-hour petrol station and rest stops somewhere between Colesburg and Cape Town.  The Golden Egg is a greasy oasis for travellers passing through the desert heat of the small Karoo on their way to somewhere else.  It’s a restaurant that favours quantity over quality.

Our lead character, Bertha, is a young coloured woman trapped in this nowhere place as a waitress serving the constant trade of holiday makers, farmers, truckers and drivers as they pass through the curling linoleum and faded yellow plastic of this quickly forgotten diner.  Bertha dreams big however, and her fantasy life sets the scene for the fantastic parallel world of the characters that live between Bertha’s head and the blank page of her waitress’ notebook.

It is between this fantasy world of her written characters and the gritty reality of the diner that the drama of “If” unfolds.

Bertha fancies herself a writer – the Doris Lessing of the desert – and she’s currently writing that South African screenplay everyone seems to be waiting for.  But as every aspiring writer knows, finding one’s voice is no easy matter.

As she writes, the characters duel back and forth as they try figure out what the hell is going on in their author’s story.  For the characters in her stories, led by a vivacious Julia, things are less than ideal.  When the rules of your world are in the hands of a less than competent writer, things can become strange indeed.

Thanks to her obsession with Mills and Boon novels, her characters spent the last year travelling the world and romancing Latin lovers (the stuff of twee and superficial romance novels).  But now, things are about to change…

Click on the link to read the first scene of the TV series here : IF Scene One

We have painted our enemies with such wickedness and hatred that only their complete destruction is a valid outcome. This...

Telling stories is what we all do, but if you want to be heard you need to use a common...

Nothing has prepared us for the onslaught of intimacy and rage that social media fires into our ape brains.

Being mindful of an Immersive Life.

Rather than seeing us losing our reality to virtual worlds, we are given the mindfulness of a guru or yogi...

Think of identity as a political revolutionary movement. It's existence is necessary for it to challenge or topple the status...

The joys of dealing with shaved monkeys

No Result
View All Result